Apologies and Other Thoughts 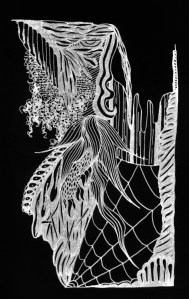 First things, first. My apologies for not having been here for a while. I got involved in other things, then let the time slip away. In April, I decided to try to do NaPoWriMo, which is a poem a day challenge through National Poetry Month. Then someone asked if I’d give prompts for the same. I, less than enthusiastically, agreed but only if I had some help, which I did receive. But, now we are half way through May, and I still haven’t been back here. I have been reluctant, to say the least.

Writing a poem a day is a difficult task, and although I have done it several times (both on my own, as well as for National Poetry Month), that doesn’t make it any easier. I always remind myself of something Robert Bly told Bill Moyer in an interview, when Moyer commented on the fact that writing a poem every day can’t mean all the poems are ‘good’ poetry. Bly’s response was laughter, then he said, “Some days, you have to lower your standards.” That comforts me on those down days of such a cycle, and I have used that reality to make even more poems:

But now, we are more than half way through May, and although each morning as I waken, one of my first thoughts has been, “you need to get back to that series on myth,” and yet, have managed to avoid doing just that. Why? Good question, and not an easy one to answer.

I have been watching the news throughout this time period. And must admit, that what is happening in my world, my country, makes for a deep sense of foreboding. Fear and uneasiness do not make a good playing field for creative endeavor of any kind. Creativity is built on an element of hope. Hope that the effort will be both productive and enlightening. But, after watching sanctions and laws repealed, almost on a whim, in order to make money at the cost of those most vulnerable among us, it gets more difficult to find hope in the present day reality.

And yet, that is just what got me started on this project. Myth, mythology, and symbolism had a great deal to do with how I became whoever I am. They have helped me to explore my own truths and the choices I have made in following the path of my own existence. Yet, I have allowed myself to become distracted and have managed to hobble myself in the process. That ends now.

Joseph Campbell tells us that we resonate to myths because they are the story of human development. Somewhere in these stories, we find pieces and parts of our own experience, and through them come to know a bit more about who we are, why we are, and even what we may be about.

For instance, in the myths I will be exploring, I find truths about human history, especially that pertaining to the Patriarchy and its constant need to diminish women. To control her, rather than allow her to flourish. We saw the underbelly of that reality in the recent trial of Larry Nassar. Over 300 young women (girls) sexually abused by one man. Some who spoke up, but were silenced by others in roles of authority, who had to have some inkling of what was actually happening. And I’m not just speaking of men in positions of power, but women as well. How could this become the norm, or acceptable in any manner?

One major answer, among many, must be that of centuries of conditioning. And part of that conditioning is reinforced by the stories and myths we hear repeated time and again. For instance, take the color red. For centuries, women were cautioned about wearing the color because it symbolizes passion, or a passionate nature. What got Red Riding Hood in trouble? That flaming red cape she wore. And the myth about the woman who wore red shoes that eventually danced her to her death. If a woman wanted to be treated with respect, or at least with common decency, she didn’t wear the color because everyone knew that only women of a certain lower level would dare to do so. Yet, we all know that if a strange man chooses to attack an unknown female, it probably has nothing to do with her footwear. It has way more to do with how he thinks and sees his own role as a male member of society. The conquering warrior, and dominant one whose many aspects are also relatable to that of a predator. Elements of which we all come in contact with during the process of growing up.

If a woman was attacked, it wasn’t her attacker who came into question first. It was her own person, and behavior. What was she wearing, was she being flirtatious? Had she been drinking, did she do these things on a routine, or regular basis? In other words, how did she make herself a target for such behavior? As if she would knowingly do such a thing.

That is why it took over 300 girls and young women coming forward to put an end to one man’s sick perversions. He was a doctor, and frequently said that they were just too young to understand that he was performing a medical procedure. And for decades, that was an accepted reason for dismissing whatever accusations were made. Why?

Could it be because most women learn at a young age, that they could, at any moment, become prey, and then be accused of asking for it? So, they remain silent, and even find themselves guilty for being in the wrong place at the wrong time. Or that they should have known better? Should have been able to discern, at a glance, that this particular man would take his sense of male privilege to a place that can never be acceptable, but somehow, silently is? Because she lives within a society that says she alone is responsible to see that it never happens to her, while he is told that when a woman says “No”, she really means “Yes?”

There is so much wrong in all of this. But, the #MeToo Movement is a rallying point for all women and men. It is long past time that this issue be addressed. Time for the world to take a clear and honest look at what we humans have created and also destroyed in the process of becoming whatever we are to become. Perhaps time to finally balance the books and find a different way, a different definition, a new way of seeing and knowing. But above all of that, maybe it’s time for a new level of respect to be born and nurtured among all of us. 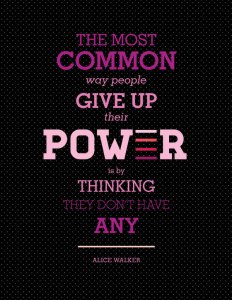 The most common way people give up their power
is by thinking they don’t have any.

Loves words and language. Dances on paper to her own inner music. Loves to share and keeps several blogs to facilitate that. They can be found here: https://1sojournal.wordpress.com/ http://soulsmusic.wordpress.com/ http://claudetteellinger.wordpress.com/
View all posts by 1sojournal →
This entry was posted in Apologies and Other Thoughts and tagged #MeToo, apologies, conditioning, distraction, Nasser, Time, yes and no. Bookmark the permalink.

10 Responses to Apologies and Other Thoughts