I have this thing with Indigo Blue. It started a long time ago, actually the first time someone told me to try playing with the paint program on a computer. That was almost thirty years ago. The image above, was the result of my ‘playing’. The paint programs, back then, were pretty simple, but still far beyond my ken. I spent a good amount of time just swirling the color around, not with any intention of creating a picture, but simply enjoying the play and the movement.

Until, I realized I had created a background sky of my favorite time of day: twilight. And, decided to take the next step, like maybe putting a tree up against that background. It took a while, but when my friend came back to see what had kept me so quiet and busy, she grinned and said, “Not bad, for a first attempt.”

I nodded, and said, “Too bad, I don’t know how to draw a bird of prey, that would be perfect, having it coming in to perch for the night.”

“Well, that’s why they have a cut and copy/paste function. So you can do that.”

“Have no idea what you mean by copy and whatever. You forget, I’m a writer, not an artist.”

“Move over, Grasshopper, and I’ll show you.” I did.

“First we have to find the actual shape you want. We’ll go looking for a bird of prey, you think is appropriate.” We did that and found one that was suitable.

“Now, I’ll cut it out, and then we’ll paste it into the background you have created.”

And I promptly lost interest and wandered off elsewhere. Only returning when she called my name. When I was finally seated next to her, she asked me where I wanted the bird, and I pointed to where I thought it should be. Then watched as she carefully positioned it, and clicked. Then with a few strokes, added a bit of the color already on the monitored canvas, and there was the image, I had imagined in my mind. It was magic. And I clapped in whole-hearted appreciation. Then I carefully transferred the image to a floppy disk, yes, that’s how long ago this took place. And it marks my falling in love with Indigo Blue, which continues to this present moment.

When I feel a bit lost, out of sorts, or just plain angsty (I just made up that word), I will eventually find myself in front of the paint program, dabbling with Indigo Blue (even its name feels good on the tongue).

And can see my own slow progress, as I eventually became more proficient with the always changing and new effects within whatever paint program I might be using. The friendship hit some very turbulent waters and ended in ten long years of silence. But, I never lost my appreciation for that search in twilight shadows.

Staring Into The Future
Digital Painting
by
Elizabeth Crawford

A single phone call put an end to that silence, and we began to chat, regularly on Messenger. In the course, of which, we also began sharing the different art things we were doing. I sent her an image of my first attempt at creating a rainbow. It had started, once again, with swirls of Indigo Blue. When I shared it with her, I told her that I thought lightning might be better than my attempted rainbow. She sent it back, only a short time later, having replaced the rainbow with lightning.

Having spent the past few weeks, sorting through my picture files, I’m very aware that Indigo Blue has spoken to me in all the forms I have used to express myself. That would include some photography, 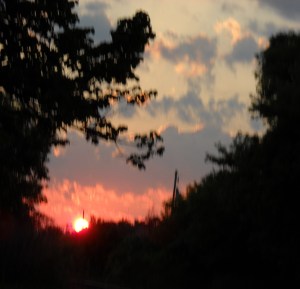 my pen and ink doodles, 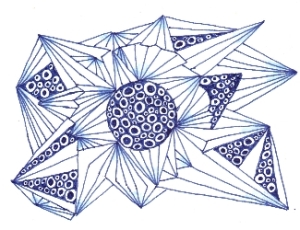 and even my kaleidoscope images,

hand colored or from photographs.

Perhaps it is the call of the sea, buried in the human psyche, calling us back to our beginnings. On a personal level, I find something soothing and comforting in its language. It speaks to me on a deep soul level, perhaps in words, or music, I can’t translate in any other fashion. Only know that I will continue to seek it out, wrapping myself in its comforting wisdom.

Loves words and language. Dances on paper to her own inner music. Loves to share and keeps several blogs to facilitate that. They can be found here: https://1sojournal.wordpress.com/ http://soulsmusic.wordpress.com/ http://claudetteellinger.wordpress.com/
View all posts by 1sojournal →
This entry was posted in Indigo Blue and tagged artist, comfort, dabbling, different mediums, Indigo Blue, Relationship, shadows, soothing, twilight. Bookmark the permalink.