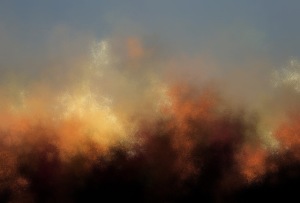 When you come at me,
face red, engorged
with passion, mouth spewing,
spitting words like bullets,
meant to pierce what you imagine
is only hard headed, wrong
thinking,

Startle me to a stillness,
where I must immediately decide
whether to stay and try
to hear beyond all the noise
you are creating,

or run like hell, to hide
behind the fiery wall
you have just built
between us?

Notes: Yesterday, I watched a video discussion between two neighbors, who each stand on either side of the current political scene. One, a woman who was obviously a democratic supporter, the other a Trump man. They had obviously been exchanging op-positional tweets that had become quite heated. The woman had suggested that they sit down and try to calmly clear the air. She asked him why he supported Trump. And although he started out calmly, telling her how he, as a male head of household, has been struggling for years to keep his nose above the water line, he became quite agitated when he said, he was failing and wanted the change that Trump promised.

He seemed genuinely surprised, when she responded with understanding and agreed that she could see where he was coming from. Then stated that she only wanted the continued national policies; to see that all individuals should benefit equally from the laws and democratic principles of this country.  Then she asked him if he understood how she, as a woman might be upset, even frightened, by some of his recent rhetoric, reading quotes from his twitter account including suggestions that certain ethnic groups should be set on fire, and that a wall on our borders was a great idea, as well as some extremely derogatory statements about our present First Lady, and several female news reporters. She finished by asking him if he could understand that she might be frightened that her children might hear such statements. He was astounded, and first told her that children couldn’t get on twitter, then said the setting on fire statement was only figurative language. He finished by saying that his remarks about the First Lady were only jokes, that he had ended them by typing in the words “Just saying” and that everyone knows that means that one is simply sharing a joke. She abruptly ended the conversation right there, by saying that perhaps they should both think about what they had discussed and perhaps meet again at a later time.

But, I do have a question. Is he correct, that the phrase “Just saying” means one is only joking? I have been a student of words and language for well over half of my existence. I have always thought that phrase meant….These are my thoughts put into words. My thoughts are based in my beliefs and those beliefs fuel my actions. What are your thoughts about the words I’ve just spoken?

4 Responses to Did You Know?